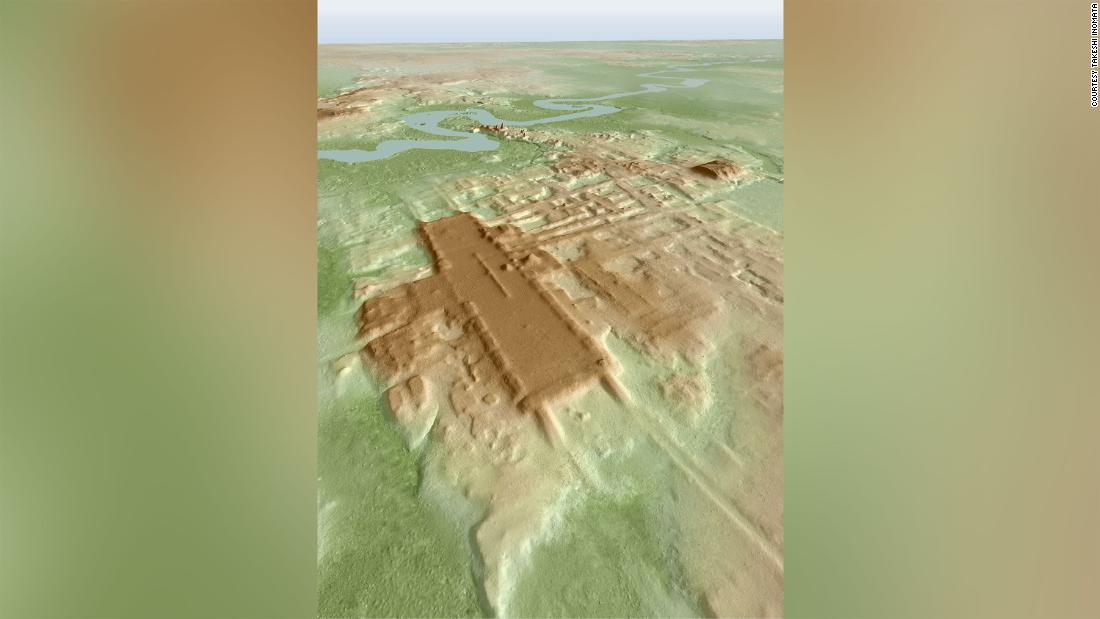 It's painstaking work that took entire careers to complete.
But now, archeologists -- or at least their tools -- are taking to the skies.

A new remote-sensing technique called lidar, or light detection and ranging, can produce detailed models of any terrain, revealing secrets usually hidden by tree canopy and forest.
This laser mapping is increasing the speed and scale of archeological discoveries and has now revealed the earliest and largest ceremonial structure ever built by the Maya -- covering more ground than the Great Pyramid at Giza, Egypt.
"It is so huge horizontally that if you walk on the site, it looks like a part of natural landscape. You would not recognize its rectangular shape. But in lidar it came out nice," said Takeshi Inomata, a professor of anthropology at the University of Arizona and the lead author of a paper on the discovery, which published Wednesday in the journal Nature.

"Without lidar, we probably would recognize the importance of this site eventually. But it would have taken many seasons of laborious mapping on the ground," he said.
Called Aguada Fénix, this previously unknown Maya site in Tabasco, Mexico, was built between 1,000 BC and 800 BC. The huge elevated platform stands 10 to 15 meters above the surrounding area with nine causeways extending from the platform.
Inomata said its volume, 3.8 million cubic meters, is larger than the Great Pyramid of Giza, Egypt (2.6 million cubic meters) --- although it's much shorter than the pyramid.
The platform would have been used for for rituals and the team found jade axes and other precious objects in its center, said Inomata.

"The ritual possibly involved processions on the causeways, and the gathering of a large number of people in the rectangular plaza. It was a place of gathering for the community, which probably motivated people to build it."
The Maya were a Mesoamerican civilization that flourished across Mexico and Central America from 2000 BC to the time of the Spanish Conquistadors in the 16th Century. They are best known for the taller, stepped pyramids built at sites like Chichen Itza.

Lidar has revolutionized the field of archeology in much the same way as the discovery of radio carbon dating did in the 1940s, said Patricia McAnany, a Maya archeologist and a professor at the University of North Carolina at Chapel Hill, who was not involved in the research.

The technique relies on laser pulses, which are emitted from a plane or drone, and the signals that bounce back generate data. Image processing can then yield models of bare terrain from which the vegetation has been digitally removed.
"Straight lines and corners in a bare-terrain model suggest elements that have human rather than geological origins," wrote McAnany in a commentary on the study also published in Nature.
It previously took years of fieldwork to map a large ancient Maya city such as Tikal in Guatemala and Caracol in Belize, McAnany said in the commentary.
"I have spent thousands of hours of fieldwork walking behind a local machete-wielding man who would cut straight lines through the forest," McAnany said. "This process creates a grid within which we archaeologists proceed on foot to locate any structures present. Then, after more machete-cutting to reveal the corners, shape and height of ancient constructions, the structures could finally be mapped.

"Lidar images from one plane flight can provide more information than can be generated by decades of conventional archaeological surveys," she said.

This latest discovery sheds light a central question in archeology: how did community life develop? Did it begin with sedentary life in small villages or periodic gatherings for ritual activities, such as religious or astronomical observances?
McAnany said sedentary life was generally thought to have paved the way for ritual gatherings, but newer evidence is emerging to suggest it was the other way around.
At the newly discovered site, the study said the lack of residential platforms suggested that its inhabitants led at least a partially mobile life.

Inomata said that the discovery also calls into question the traditional view that large construction projects in ancient times required a powerful elite and social inequality.
No clear indicators of marked social inequality, such as sculptures representing high-status individuals, were found at the site, Inomata said, which means construction of Aguada Fénix was done in the "absence of powerful elite."
"Though there were probably some leaders who played central roles in planning and organizing such work, the main factor was people's voluntary participation in such constructions. It tells us the potential of human collaboration which does not necessarily require a centralized government."