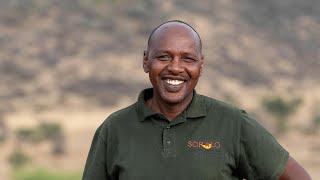 'Maasai have rules and taboos you cannot cut a tree, for example'

Standing on an escarpment, John Kamanga surveys the tangled, brittle grasslands rolled out like a thread-bare, yellowed rug all the way to the foot of Shompole Mountain.

“We called this area ‘the dustiest place’,” he recollects, describing a landscape so dry and barren, it was frequently prone to blinding dust storms and grit-hurling tornados. “It’s where the community would bring cattle during times of drought.”

Once nomadic settlements had been shifted, it only took five rainy seasons for the pasture to bounce back. Now it’s been set aside as a conservation area within Shompole Conservancy in Kenya’s Kajiado district and serves as example of what can be done if land is managed properly.

As executive director and founder of the South Rift Association Of Landowners (SORALO), a grassroots collective of Maasai-owned group ranches connecting the Amboseli and Masai Mara ecosystems, John is a fierce advocate for protecting open, fence-free landscapes where animals can move freely and communities benefit from shared ownership.

“Collectively, we are very strong as a group,” says the innovative thinker, whose mind whirs so rapidly with bright ideas, conversations can be dizzying.

From tourism initiatives to grazing rotation plans and visions for an interactive Maasai cultural and historical visitor centre, the scope of his work is enormous. Yet he’s never overwhelmed. On a four-hour journey through one of the few remaining communal Maasai lands, he finds time to speak with every pastoralist and knows them all by name.

“The government has been struggling with the traditional control and protection of wildlife. But you can’t have a gun under every tree where animals are found,” claims John, on his way to a meeting on the outskirts of Olkeri village.

In a small school room, a group of Maasai elders listens attentively as a lawyer explains their rights to formalise customary land tenure under the 2016 Community Land Act. Although it’s probably the first time many of these cattle herders have stood in front of a chalk board, everyone has an educated opinion to share.

“This legislation gives communities a very big say in what happens to their land,” says John, who believes the future of conservation lies in community empowerment. “That’s why we’ve offered them free legal advice.”

The first member of his family to attend school, John is adept at juggling the western world with an indigenous way of life. Even though he now lives with his wife and children in Nairobi, he still comes home to herd his cattle in this semi-arid landscape, where lions shift stealthily through the husks of umbrella thorn trees and flamingos flock above psychedelic salt lakes.

An invitation to assist researchers counting tsetse flies and butterflies in the region was a formal introduction to environmental work, but a fundamental knowledge of land use and respect for wildlife came from his father.

“Maasai have rules and taboos – you cannot cut a tree, for example,” he explains, arguing these traditions should be resurrected and strengthened as a framework for conservation.

“Communities have been, and will continue to be, the custodians of wildlife. Now we need to give them the tools for today.”

John Kamanga is shortlisted for this year’s Tusk Award for Conservation in Africa, sponsored by Land Rover.