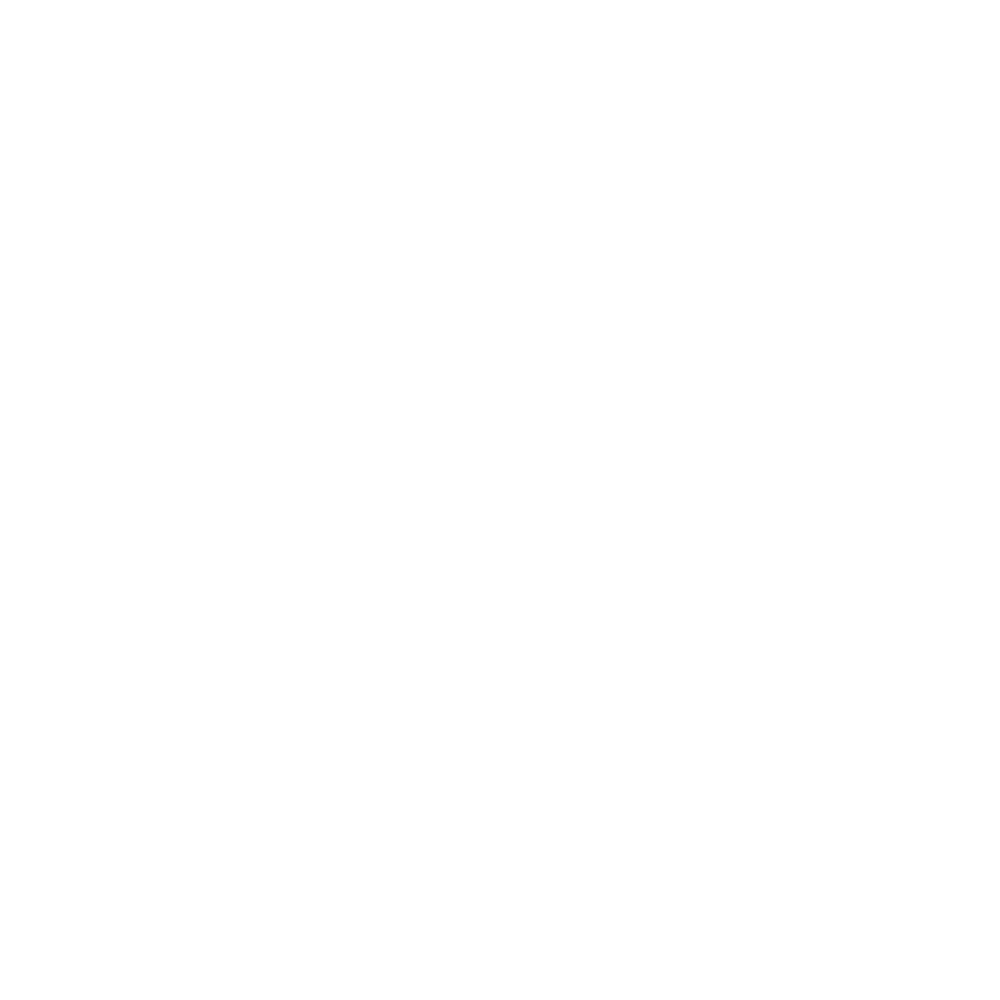 Leisure Vacays
Home Destinations What to do in Warsaw: The ultimate Warsaw travel guide

Hey there! Alexx here from Finding Alexx, I’m visiting a new country every week for a year with my route based off the cheapest flight each Tuesday. Crazy? Yes. Epic? Also yes. You can read more about my trip here, and week 4 took me to Warsaw, Poland. Here’s all you need to know about this incredible city, in  my full Warsaw travel guide!

Known as Poland’s Phoenix City, because it rose from the ashes of World War II, Warsaw is the perfect European getaway for so many reasons. It’s cheap to visit, it has so much history to discover, the food is hearty and delicious, and the nightlife is next level. Tempted? You should be!

Where to stay in Warsaw 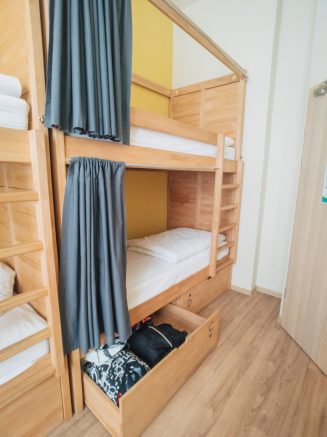 Accommodation in Warsaw is cheap… And I’m talking less than £10 a night cheap!

My top pick for where to stay in Warsaw is DREAM Hostel, an award-winning youth hostel with fantastic ratings. DREAM’s location is perfect, just a minute’s walk from Castle Square, and there’s wallet-friendly food all around. I spent my whole week in Warsaw at DREAM, and met some amazing fellow travellers there too.

In terms of facilities, DREAM has a full kitchen, an on-site bar, washing machines and super clean shared bathrooms. The rooms themselves are one of the best hostel rooms I’ve ever stayed in, with privacy curtains, comfy mattresses, lockers, your own plug and a light. Oh, and the best part is you can book a bed for £9. Bargain.

If you’re keen to have your own place, you can find good quality apartments or hotel rooms in Warsaw from as low as £30-£35 a night.

How to get around Warsaw 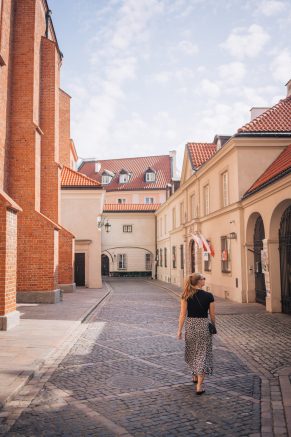 The main Old Town of Warsaw is closed to vehicles so you’ll need to wander around by foot, which is the best way to explore it anyway. If you’re heading outside of the Old Town, you can walk, bus, tram, scooter, bike or Uber. So many options!

Warsaw is a pretty walking-friendly city, it’s only 30 minutes by foot to get from the Old Town to the Palace of Culture and Science, which are two of the main tourist spots. There’s a decent public transport system too, made up of bus, tram, train and metro lines, which all take the same tickets. Public transport tickets can be bought from machines in the metro and train stations, some tram stops, and on some trams and buses (by card or exact change only). Tickets are 4.40 PLN (Iess than £1) for 20 minutes, or 15 PLN (about £3) for a day ticket.

Warsaw has a bunch of different bike and scooter rental companies too, and I used Lime scooters to get to and from the central city most days. There are a couple of different apps but Lime was the easiest as its default language was English.

For longer distances or if you’re in a rush, Uber is really cheap!

How much to budget for Warsaw

Normally this is the most depressing part of the travel guide to write, but I’m stoked to say that Warsaw is the perfect place for any travellers on a budget!

For ultra-frugal backpackers, you’d be able to visit Warsaw from only £20 a day (£8-£10 for accommodation, £10 for food) provided you’re not drinking, taking public transport or paying for museum entry. If you’re keen to indulge in the local nightlife, tick off some of the main tourist sites and eat at nicer places, I’d say £40 is plenty. 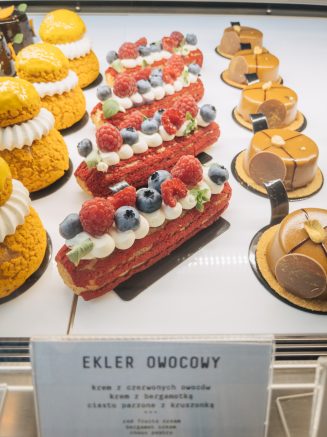 Breakfast in Warsaw is cheap, with loads of places offering breakfast and coffee deals for around 10 PLN (£2). You can grab takeaway street food like waffles, crepes, fries and sausages for the same, so a cheap lunch or dinner is easy to do. One of my fave cheap eats is a zapiekanka, a long baguette cut in half length-ways, topped with pizza-style toppings like mushrooms, cheese, peppers, onions and meat, then grilled to perfection, for 11 PLN (just over £2). YUM.

The best things to do in Warsaw

Aside from revelling in how far your money goes, here are some of my favourite things to do in Poland’s capital city. 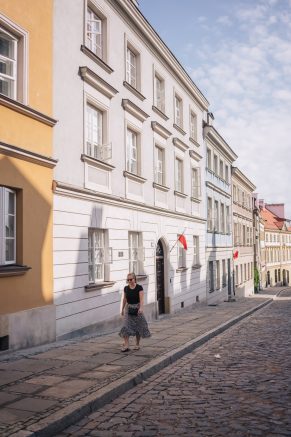 One of the best ways to get a feel for a city is to do a city tour, and Warsaw has LOADS to choose from.

The free walking tour is always a good place to start, where English-speaking local guides will take you around the main landmarks and tourist areas, giving you a quick overview of the history behind the city. Note that these tours are tip-based so you pay what you feel the tour is worth, I normally tip the equivalent of €10 in European cities.

For a more in-depth lesson of Warsaw’s sombre past, you could book a Jewish city tour that takes you to key WWII landmarks and teaches you about the city’s Jewish history and culture, or a communism tour to learn all about how the city was under Communist rule.

2. Eat your way around Warsaw 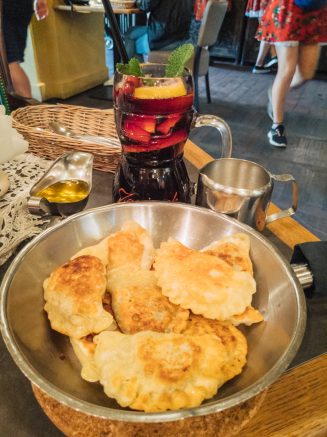 Another brilliant way to get amongst a new place is to dive head first into the culinary scene, and in Warsaw you can easily do this on a budget.

Traditional Polish cuisine is hearty and meaty, with strong seasoning and a lot of butter and cream. The country is particularly known for its pierogis (dumplings, both sweet and savoury), bigos (cabbage and meat stew), kotlet schabowy (pork cutlet) and a huge variety of soups from different parts of the country.

If you’re looking for a proper Polish meal, you should pay a visit to a bar mleczny (a milkbar in English). These milkbars were common during the Communist era to provide hearty but cheap meals, and they’re the perfect place to try traditional dishes. One of the best milkbars in Warsaw is Bar Zabkowski, just a short walk across the river from the Old Town, where you can get a decent-sized pork cutlet and a side of mashed potato or other veggies for less than £2.

For pierogis, you have hundreds of places to choose from, each with different flavours and lots with long-time family recipes. I’d definitely suggest trying out a couple of different pierogi places, and your hostel can help with recommendations, but one can’t-miss is Zapiecek, a chain restaurant with a couple of locations around the city. They have a huge variety of savoury and sweet pierogis to choose from, and you can mix and match your choices! You need to order a minimum of 9 pierogis and it’s on the more expensive side of Warsaw restaurants, but by expensive I mean maximum £6 for 9 dumplings, so it’s probably not going to break the bank.

Despite the importance of meat in Polish cuisine, Warsaw is also known for some incredible vegetarian and vegan spots for any plant-based diets. Edamame Vegan Sushi is one of the best in the city, and it’s also worth checking out the cheap vegan burgers from Chwast Food and the burrito and soup lunch special at Momencik.

3. Go out-out with a pub crawl

Warsaw’s legendary nightlife is one of the reasons why it’s so loved by backpackers, and there’s no better way to see it than on a pub crawl. Warsaw Pub Crawl is the one to go with, they’ve hosted over 30,000 partiers and have the best reputation in the city by far.

It’s 55 PLN for girls and 60 PLN for guys (soz boys, it’s a hard life huh) which is about £7 and £8 respectively, and that gets you one hour of an open bar at the first stop, then another three bars and a club with a free shot at each. Put on your party shirt, take your dancing shoes and get ready to cut shapes with other young travellers from all over the globe.

Disclaimer: Polish alcohol can be stronger than you’d expect, so pace yourself. Yes, that’s speaking from experience and yes, my stomach turned a little bit trying to write this part of the blog. 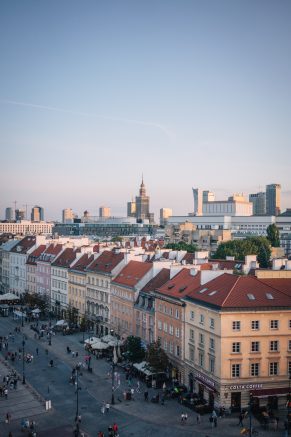 Warsaw’s Old Town was first established in the 13th century, but a lot of the buildings and homes were destroyed during the invasion of Poland at the beginning of WWII. In the following years there was an effort to rebuild some parts of the Old Town, until just after the Warsaw Uprising of 1944, where the German Army blew up what remained in the district. By the start of 1945, over 85% of the city had been destroyed.

Despite such a dark and horrific past, the beautiful Old Town is now a place of colour, entertainment, traditional meals and cultural museums. The buildings have been reconstructed to as close as they could get to their original styles based on the paintings and drawings they had, and they even sifted through the rubble to find original bricks to reuse in the rebuild.

Old Town’s Market Square was the major community meeting point back in the old days, and it was used for events, celebrations and executions. Now it’s a must-see for the pastel yellow, orange and red buildings that surround it, which makes for a stunning photo against a blue sky backdrop. There are plenty of restaurants and souvenir shops in the main square, and unlike a lot of major European cities, they actually aren’t too pricey.

Amongst the gorgeous buildings there’s also a 17th century Royal Palace, a number of museums and 14th century fortification walls. At sunset the best place to be is up the Old Town Observation Tower, on Castle Square, and entry is just 5 PLN (about £1). You’ll get a beautiful view of the Old Town houses at golden hour.

5. Get a history lesson from the museums 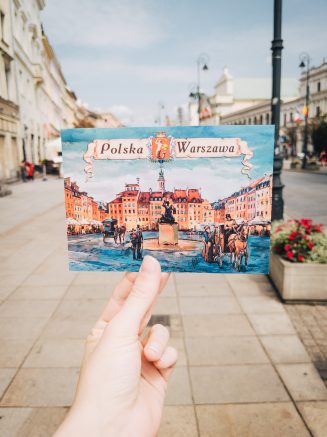 This is one of those cities where you really have to learn about the history to be able to experience and understand it properly. Walking tours are excellent for getting an overview, but Warsaw’s tragic past, as well as its miraculous recovery, are documented in depth at the 70 different museums dotted around the city.

The Warsaw Uprising Museum is an absolute must-visit, to learn about the horrific nine week period of WWII in 1944 where up to 200,000 Polish civilians were killed in mass executions by German forces, after the Polish Army attempted (and failed) to reclaim the city from German occupation. My trip coincided with the 75th anniversary of the Warsaw Uprising of 1944 and it was incredible to see the city’s memorials and celebrations. Entrance is 20 PLN (£4) but it’s free on Sundays.

The POLIN Museum is fairly new, only opened in 2014, and it showcases the ups and downs of Jewish history of Poland over the past thousand years. Classics and art geeks might want to visit the National Museum, which houses a huge collection of ancient artefacts and Polish Medieval art, or for something totally different you could visit the Museum of Caricature and Cartoon Art near Castle Square.

Poland’s capital is the ideal destination for a cheap European getaway, with so many incredible things to eat and beautiful places to see. Whether you’re a history nerd, a foodie, an art-lover or you’re just looking for a budget-friendly weekend, Warsaw is perfect.

Excited to discover Warsaw after reading our travel guide? Book cheap flights to Warsaw now. If you want to follow more of my adventures you can find me on Instagram here or check out my blog here.

Here Are The Current Travel Restrictions In Every State

15 Beautiful US Islands That’ll Make You Forget All About Traveling...