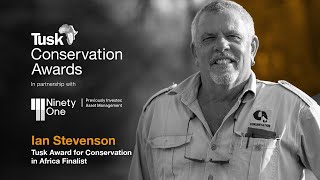 Ambling silently through chartreuse-green reeds, an elephant and her calf have crossed to one of many islands anchored in the Zambezi River. Hot and thirsty, herds are scattered across Zambia’s Lower Zambezi National Park – some feeding on the pods of winter thorn trees arching over dusty banks; others wading through pools of ruby evening light.

It’s a fairy-tale scene of peace and harmony, but conservationist Ian Stevenson recalls it wasn’t always that way.

“When I when I started flying down here 20 years ago, I’d take off and see 20 drying racks in a morning,” says the accomplished pilot and CEO of NGO, Conservation Lower Zambezi. “Lion prides were moving from one carcass to another. We were being hit hard. In 2015 alone, we lost 107 elephants.”

Last year that figure drastically reduced to one, largely as a result of efforts made by Ian and his team. A combination of improved relations with the government’s Department of National Parks, deployment of specialised surveillance teams, a greater intelligence network and a change of attitudes within communities has helped elephant populations recover.

Now, Australian-born Ian describes the Lower Zambezi as “one of the big strongholds of elephants left in Africa, in the world for that matter”.

Eager to maintain the high levels of protection CLZ have achieved, he was recently involved in a project to collar several animals moving into a remote area of the park, largely as a result of increased population pressure on the valley floor.

“We’re trying to see where they’re going and what time of year they’re going there,” says Ian, who’s spent two years fundraising for the project.

Elephants have always been a passion for the calm, modest leader, who repeatedly credits his 76-strong team for CLZ’s success.

Thirty-three years ago, while travelling through Tanzania’s Serengeti as an over-landing tourist guide, Ian had an encounter that would ultimately set him on a new career path.

“I came across a small herd of elephants that had been poached. I don’t know why, but it had a real impact on me,” he recalls, still shaken by the memory.

“I started learning more about them and spending time with them; then for the last 20 years I’ve been protecting them.”

Managing a lodge in the Lower Zambezi National Park led him to get involved in darting and de-snaring work, eventually resulting in jobs for African Parks and CLZ.

Most days his light aircraft can be seen soaring above the valley and escarpment, monitoring the landscape. An essential tool for his job, flying also has therapeutic benefits.

“It’s my little escape,” he smiles. “Up there, everything else goes away for a while. Then you’ve got this lovely thing in the afternoon where you can fly up the Zambezi on the way home and you’re close to the water and the setting sun.”

He admits the risk elephants could be wiped out in parts of Africa still concerns him, but he believes the focus should now be on protecting their habitats.

“We’ve got to maintain those big ecosystems without all the fences, the barriers and the borders. Then I think elephants have got a very good possibility of survival.”

Ian Stevenson is shortlisted for this year’s Tusk Award for Conservation in Africa, sponsored by Land Rover.